Refiners have borne criticism this year for a rise in gasoline prices that was in fact caused by market forces.  As others have pointed out, this summer’s U.S. refining capacity fell to the lowest level since August 2015, and the reduced capacity to supply gasoline was one of the factors that drove the increase in prices paid at the pump.  When capacity is reduced, the amount of gasoline supplied at any given price is reduced.  The supply curve shifts to the left, and the equilibrium price where the market is supplied with exactly as much gasoline as is demanded rises.  The chart to the right provides an example of generalized supply and demand curves to show how the reduction in supply leads to a rise in prices. 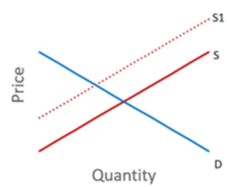 What was behind the reduction in capacity this summer?  Four major refineries have closed since COVID, and their closures are apparent in the precipitous step-downs from the all-time high in the chart below.  These are the closure of the Philadelphia Energy Solution (PES) refinery in May 2020; Marathon’s Martinez, CA refinery in September 2020; Shell’s Covent, LA refinery in January 2021; and Phillips 66’s Belle Chasse, LA refinery in March 2022.

The reason for these closures is primarily economic at the surface level.  We surmise that the cost of repairing PES’s refinery after a catastrophic explosion and fire in 2019 led to its closure.  According to management, Phillips 66’s Alliance refinery was shuttered permanently after 12 feet of salt-water flooding during Hurricane Ida made restoration too costly.  Marathon and Shell closed their refineries cited above to convert them to produce subsidized renewable fuels.  A forthcoming closure that will further reduce capacity is LyondellBasell’s Houston refinery.  Management cited $1 billion in investments to continue operating the refinery safely as the reason for its closure by the end of 2023.

Government regulation is sometimes cited as driving higher costs that reduce returns on capital and lead to refinery closures.  But what regulations exactly increase the costs?  We have one example of pending regulation that could do just that.

The Environmental Protection Agency (EPA) introduced a proposal on August 31, 2022, that would require every U.S. refinery to perform a Safer Technology and Alternative Analysis (STAA) on its hydro-fluoric acid (HF) alkylation units.  HF alkylation units are one of two types of alkylation units that may be present in refineries to increase the output of gasoline.  The result of the STAA could lead to millions of dollars in required investment to convert HF units to alternative processes.  Alkylation units require the support of catalyst regeneration facilities, which would be an additional cost if one does not exist nearby.  In a 2018 letter to the City of Manhattan Beach, PBF Energy estimated that the cost of converting its Torrance, CA refinery’s 30 mbpd HF alkylation unit would be $600 million with an additional $300 million required for a catalyst regeneration facility.  This is more than the value of the entire refinery, which was purchased for $537.5 million in 2016.

We believe that the cost of conversion would lead some refineries to shut down their alkylation units.  The loss of income from shutting down an alkylation unit could impair the economics of refinery to the point that the refinery is shutdown altogether.  The California Energy Commission (CEC) sees the same risk; in the case of PBF’s Torrance refinery, the CEC stated in a 2017 presentation that the Torrance refinery would likely cease operations if a ban on HF alkylation were approved.

The scope of the EPA’s proposed rule is broad.  HF alkylation units are present in refineries producing 40% of all U.S. capacity.  It is no certainty that the STAAs will lead the EPA to force the closure of any HF alkylation units; an STAA considers the practicality and economic cost of alternatives.  But practicality and cost vs. benefit conclusions are subjective judgements.  The EPA’s judgement could lead to HF alkylation unit shutdowns, and the only viable alternative to continue producing alkylate is a costly conversion.  While it may be a well-intentioned effort to reduce the risks associated with HF alkylation, the EPA’s rule could lead to HF alkylation unit or refinery shutdowns that lead to higher prices at the pump, with higher price levels we saw this past summer potentially becoming more common.